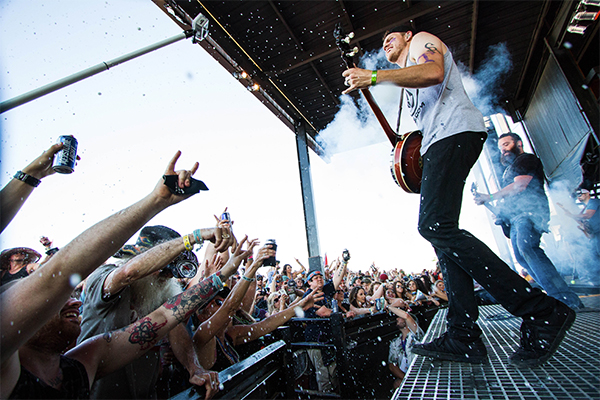 Purchase Tickets at the Gate

When Sam Riggs chose to follow his dream of being a professional musician, picking up and leaving his native Florida, he had a decision to make: Nashville or Austin. He ultimately elected to settle in the Texas capital, citing its reputation as an incubator for original talent.

On stage, expect a live show that comes out swinging and keeps the energy high. Having opened for acts that include Chris Knight; Joe Diffie; Kevin Fowler; Pat Green; the Eli Young Band; the Randy Rogers Band; and Ray Wylie Hubbard, Sam Riggs & The Night People have become well-educated in the art of working a crowd. Riggs himself never fails to dazzle with his “musical chair” performances that never restrict him to one location on the stage. Vocals, electric and acoustic guitars, banjo, fiddle, and even drums are all part of the magic that he hypnotically spins on a nightly basis.

Some might say the four-piece JB and the Moonshine Band was born the day JB Patterson looked up to see that only three musicians had shown up at his open- call audition in his Tyler, Texas, hometown. Fortunately, Gabe Guevara (drums), Hayden McMullen (lead guitar) and Chris Flores (bass guitar) turned out to be the right three and, after a brief musical and personal get-to-know-you session, everyone realized the stars had aligned to bring them together.

The combination of the band’s great chemistry and JB’s excellent songwriting gives these East Texas boys instant credibility wherever they play. Whether cranking out no-holds-barred honky-tonk drinking tunes or throttling back to sing about matters of the heart, JB and the Moonshine Band tunes have the ring of truth.

$5 Cooler Charge (at the gate)